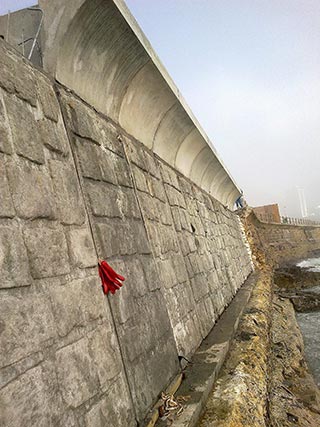 A special, cement-based grouting compound, produced by a.b.e.® Construction Chemicals, is being used for the rehabilitation of the concrete sea wall at Cape Town’s stormy Mouille Point.

Brett Papayanni, Technical Sales Consultant for a.b.e.® in the Western Cape, says the company’s duragrout is applied as levelling layer between the existing concrete foundation and the new precast concrete panels, and also to grout the gaps between the adjoining panels.

“Among the challenges posed to the main contractors, Exeo Khokela Civil Engineering, is the fact that the levelling layer has to be cast in the tidal zone of the ocean which means casting can only be undertaken while the tide is low. This means that there is only about a four-hour time-frame for the newly cast concrete and grouting to gain sufficient strength to withstand the onslaught of what often is turbulent seawater during high tide,” Papayanni explains.

“Exeo Khokela had no hesitation in selecting duragrout for the grouting because the company had previously used the compound and it also met the requirements for this project,” he adds. “Around 520 metres of sea wall will be rehabilitated in terms of this contract.”

a.b.e.®’s duragrout is a ready-for-use (merely add water) cement-based grouting compound that contains graded siliceous aggregate and chemical re-agents to prevent shrinkage during curing. It is suitable for concrete column and machinery base plates as well as bearing plates and crane rails. The compound can also be used as grouting for anchor bolts, cables, and starter bars; and to repair cavities in concrete.

“Among the many benefits of duragrout is that is quickly develops the necessary consistency for placement, it also remains cohesive without any segregation, and does not shrink,” Papayanni adds.