Three renowned Dow Corning sealants supplied by a.b.e.® Construction Chemicals are being used for the curtain wall construction of the third and final phase of the imposing new 11 Alice Lane precinct in Sandton. a.b.e.®, which is part of the Chryso Southern Africa Group, is the South African distributor of Dow Corning, which has it European headquarters in Belgium. The company is a global leader in silicones, and silicon-based technology, with a product range in excess of 7 000. The panels for the flush-glazed unitised curtain wall system are being mechanically fixed to the structure with Dow Corning DC 993 and – just 24 hours later – the gaps between the glazed units are then sealed with Dow Corning 813C to provide a weatherproof seal. A third Dow Corning product, DC 895 structural glazing sealant is being used on-site, when required, for replacement of damaged glass. 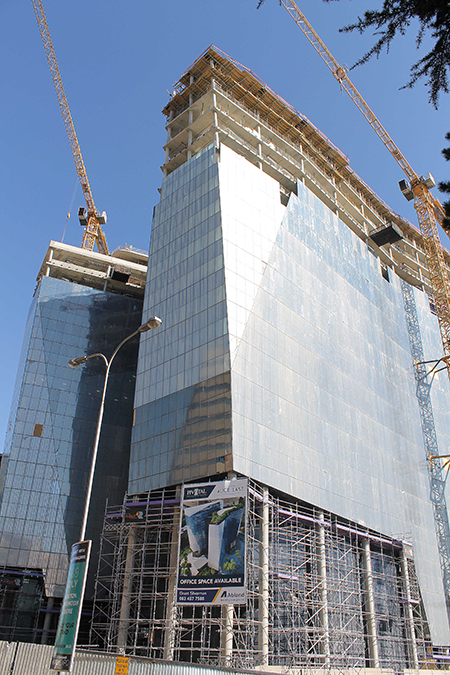 The mini-factory established by Façade Solutions in one of the basements of 11 Alice Lane’s third phase for the on-site production of the unitised façade panels for the multi-storey building. Note the cut in the basement ceiling slab to accommodate the production equipment.

Grant Batty, a.b.e.®’s National Manager: Silicones, Sealants and Adhesives, says a.b.e.® secured the 11 Alice Lane Phase 3 contract for the structural glazing sealants and weatherproofing in conjunction with its long-standing approved applicator, Façade Solutions, a leading Dow Corning Specialist-approved Quality Bond member. Dow Corning’s Quality Bond system ensures that all QB members are fully trained and certified annually and guarantees that members have the required expertise in producing state-of-the-art products, as well as installation skills. QB members benefit from specialised Dow Corning support, including joint calculation assistance, adhesion testing, application training, and regular a.b.e.® quality control site inspections. To supply the unitised panels required for the third phase of the Alice Lane project, Façade Solutions had to establish a “mini-factory” five levels underground in the basement of the new building for the fabrication and assembly of the curtain wall’s aluminium-framed glazed panels. The production facility called for a section of the basement’s concrete ceiling slab to be cut out to accommodate the height of the on-site glazing facility’s silicone pump and pipes. Façade Solutions’ on-site mini-factory was audited by Dow Corning and then also received Dow Corning’s Quality Bond approval. “The benefits of installing unitised panels include speed of assembly, lower installation costs, and quality control within a climate controlled environment. The economic benefits particularly apply to large projects such as 11 Alice Lane. Unitised panels require less space on site for layout which is important in a heavily built-up area such as Sandton with its space and access limitations,” Batty explained.

Two views of the third phase of 11 Alice Lane and its impressive glazed façade for which a.b.e.® Construction Chemicals is providing the structural glazing sealants.

Dow Corning 993 and 895 structural glazing sealants have been widely used for the curtain walls of several impressive new high-rise buildings in Sandton, with many of the applications also carried out by Façade Solutions. Some of the benefits of DC 993 and DC 895 include: “Dow Corning 813C, which is being used as exterior weatherproofing sealant, is a one-part, neutral curing, low modulus sealant suitable for interior and exterior applications, such as weather seals, expansion joints, and perimeter joints in buildings and other types of structures. It has a joint movement capability of + 50%, -50% and provides strong, unprimed adhesion to various substrates, including glazed surfaces, concrete, masonry, brick, wood, and some plastics,” Batty added.
We use cookies on our website to give you the most relevant experience by remembering your preferences and repeat visits. By clicking “Accept”, you consent to the use of ALL the cookies.
AcceptRefuseManage my cookies
Manage consent